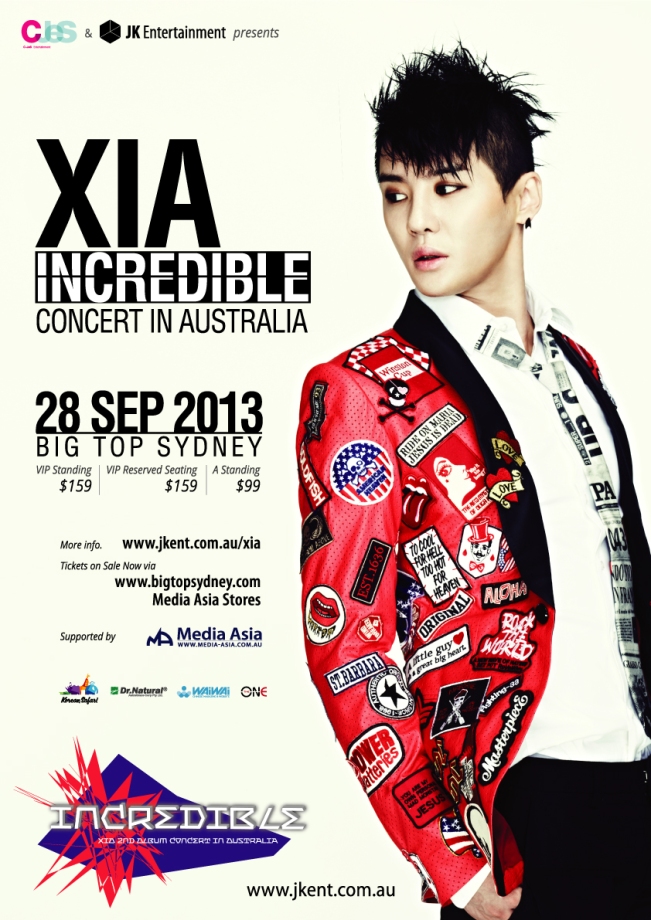 Kim Junsu also known under the moniker Xia is a South Korean singer-songwriter, dancer, and stage actor as well as a member of pop group JYJ.

Xia made his debut in 2003 and begun his solo career in 2010 with the release of Japanese single Xiah, which peaked at number-two on Japan’s Oricon singles chart. In the same year, he also took on the role of Wolfgang in his debut musical Mozart!, which was a huge success in the country.

Subsequently, in May 2012, Xia released his first full-length Korean solo studio album ‘Tarantallegra’. In the same year he also embarked on his first headlining world tour where he performed in 12 cities including Southeast Asia, United States, South America and Europe.

Following the success of his first solo studio album and world tour in 2012, Xia has returned with his second Korean solo studio album, Incredible, on 15th July 2013 where he is responsible for composing, production and of course performing of all the songs in the album! Xia’s album is also listed rank 1 on Tower Daily music chart, which quickly marks the success of the release of his second album.

Xia has since embarked on his second concert tour ‘INCREDIBLE’ starting from Bangkok, and JK Entertainment is proud to announce that Xia “Incredible” will be held at Big Top Sydney next month!

If you love Xia and/ or Kpop music, then you know this is a not to miss opportunity as it will be the ONLY SHOW in Australia! There is no better way than to see him perform live at his concert!

Tickets are now available, grab them before they are sold out!

For general inquiries or questions, please only email us at xia@jkent.com.au
Alternatively, you may also check out JK Entertainment Facebook page for new updates regarding the concert!