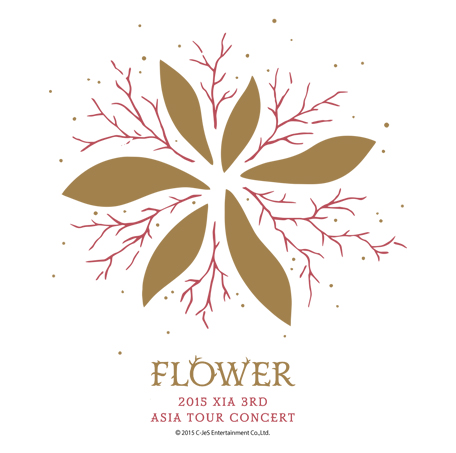 The dates for the shows in Japan were first announced by C-JeS Entertainment on January 19, 2015 through JYJ Japan Official Website while the shows in Seoul were revealed by Interpark on January 28, 2015. XIA performed songs from his Tarantallegra, Incredible and Flower albums. The show lasted for about two and a half hours while the Seoul encore concerts ran for about three hours. Stage rehearsals began on February 28, 2015 in Osaka-jō Hall.

The first round of ticket sales for the Seoul concert was opened to public on February 3, 2015 as announced by Interpark, the ticketing agency for the show in Seoul. The second round started two days later. LOOK Korea was the only exclusive authorized dealer and travel agent for international and Japanese fans.

In an interview clip with SBS PopAsia released on March 23, 2015, XIA expressed his interest in holding a show in Australia but due to the short run of the Asian tour, he said there are no plans for a concert yet.

About 15 songs were performed in each show. A special original TV soundtrack medley was included in the set list, in which he sang a mix of five tracks from the TV drama series Scent Of A Woman, The Fugitive of Joseon, Empress Ki, Mr. Baek and The Innocent Man. “Loving You Keeps Me Alive”, a track from The Musical Dracula, was included in the tour. XIA held a ‘Genie Time’ corner, where he granted three wishes of his fans on stage, throughout the tour.

The Asian tour this time around had a lot of effort and detail that were put into the stage design. 50 lights in different corners would change every time, putting on a mysterious effect for the shows. The sides of main stage also had designs to match a flowery theme. During “My Night”, XIA sat on a chair in the stage center with blue lights shining down upon him. Images of trees and a moon in a short motion clip were projected behind him to give out a magical yet mysterious feel.

Epik High’s Tablo, being a special guest, performed the rap for “꽃(Flower)” for the second show in Seoul. Tablo was the first surprise guest to have performed at XIA’s solo concert, apart from the ballad and musical concert with orchestra series. On that same night, “Tarantallegra” was added after “F.L.P” as a double encore request from fans during the show’s ‘Genie Time’ corner. XIA performed an acoustic cover rendition of Tohoshinki’s “Love in the Ice” in Fukuoka and Nagoya, as a dedication to his JYJ fellow member, Kim Jaejoong, who was enlisted in the army on March 31, 2015. 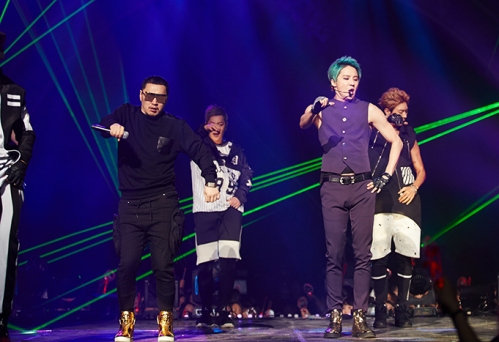 Two new tracks from the Flower album were performed in the encore shows including “그 말 참 밉다(That Is So Mean)” and “Hello Hello”, replacing the original TV soundtrack medley and “사랑숨(Breathing In Love)” respectively. XIA also added a dance medley where he performed a mix of songs “Mission, “Tarantallegra”, “Turn It Up” and “Fever”. Yang Dong Geun was the featured guest to perform the rap for “Out Of Control” for the second encore show in Seoul. XIA premiered new costumes for certain performances in these two encore nights.

In Bangkok, 200 fans from selected ticket zones were randomly chosen to attend a press conference, which was held in Lebua at State Tower. 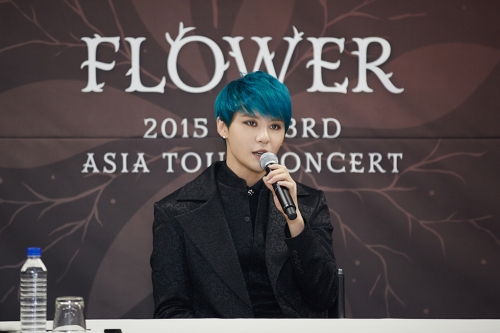 A special concert website was set up for the tour in Japan on January 19, 2015. The first promotional poster for the Asian tour was unveiled on February 12, 2015, which shows XIA in a black shirt and a vest. C-JeS Entertainment said the poster was created with the use of flash in the dark and an image of a flower.

XIA bus wraps operated from February 23, 2015 till March 8, 2015 around Seoul to promote the two-night Seoul concert.

A press conference was held for the tour on March 7, 2015 at 4:30PM local time in Seoul’s Jamsil Indoor Stadium. The singer revealed that “Flower” was originally to be titled as “Take My Hand”. He said that the lyrics of the song was like that of a flower, so the change was made on the day before the recording took place.

XIA’s “꽃(Flower)” performance from the second concert in Seoul was released on March 21, 2015 as a gift for fans after his Flower album topped major music charts during the first week of release despite facing difficulties with broadcast promotions.

The Seoul encore concert was filmed and released as a 3-disc live concert DVD on August 26, 2016. The third disc includes a 28-minute behind the scenes and interviews as XIA tours in China, Thailand and Korea. The DVD set comes with a 100-page photo book and six pieces of mini posters. The Japanese edition was released on the same day.

A new similar live 3-DVD will be released on April 14, 2017 which was recorded from the shows in Tokyo. The first two discs includes the Japanese performances in Yoyogi National Gymnasium (1st Gymnasium) while the third disc showcases the recording scene of his Flower album, dance practice clips for the tour, press conference event held in Tokyo, and other concert highlights took place in Osaka, Tokyo, Fukuoka, and Nagoya. The DVD set will also come with a 100-page photo book and six pieces of mini posters.

Tickets for the March 2015 Seoul concerts were sold out in less than 20 minutes after they went on sale and C-JeS Entertainment received requests for additional shows from fans. The Seoul encore shows in the tour achieved a rare breakthrough to sell out tickets in just three minutes. 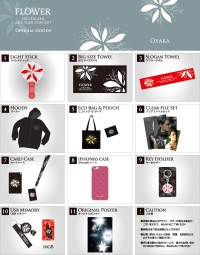 The list of goods was revealed three days ahead of the Osaka concert through JYJ Japan Official Website. The sales of the merchandise for the Osaka shows began at 12:00PM local time from March 3 to 5, 2014.

The goods for the Osaka tour were not fully available for shows in the overseas and some merchandise were removed or added depending on the demand of each country visited.

In Nagoya, four new design merchandise were sold including a black slogan towel, a new type of key holder, black edition of canvas tote bag and T-shirt. A sticker set was included in the official goods list that were not previously available in cities before Nagoya.

This list is representative of the sales in Osaka.

This table is representative of the sales in Seoul, Bangkok, Tokyo, Fukuoka, Nagoya and Seoul Encore. 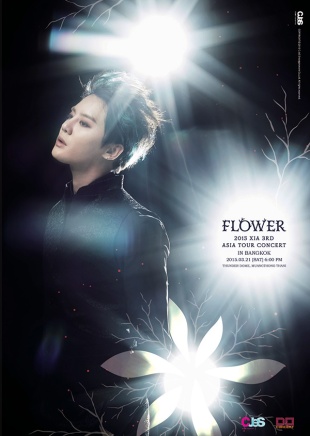