We really missed Kim Jaejoong for 640 days. One day, we have heard the news that he will kick off an Asian tour concert. He showed enthusiastic love for his fans as he prepared the NO.X album for them who would miss him during his military enlistment. These days, he is all about practice, and “concert” is the only thing in his mind. The anticipation is so high because he is preparing to meet his fans right after the military discharge.

We prepared this journal written in Kim Jaejoong’s enthusiastic concert rehearsal room for those who are shouting “I want to see Kim Jaejoong soon” in your hearts for thousands of times. Let’s go and see him now!

END_OF_DOCUMENT_TOKEN_TO_BE_REPLACED

January’s Music Special
Welcome back, Jaejoong!
We invite you to his first performance of The Rebirth of J concert.

Special │ Welcome Back, Jaejoong! We Reveal Behind The Scenes of His First Concert Meeting!

Kim Jaejoong has completed his South Korea’s military service for a year and nine months and came back to us. He presented his second album NO.X as a gift to his fans who would miss him during his service, and he will have a special time with them in the upcoming Asian tour.

Data provided by Loen Entertainment｜Posted on 2017.01.13

END_OF_DOCUMENT_TOKEN_TO_BE_REPLACED

July’s Music Special
Second Studio Album As A Complete JYJ, Just Us
A Grand Opening Of Their Work On An Album To The Public!

Special │ JYJ Comeback As A Complete Unit After 3 Years!

JYJ makes a comeback with their second studio album, Just Us, after three years with In Heaven in 2011. Just Us consists of 13 songs, in which some are composed by other composers but written by members themselves, and an English song that they worked on while in the United States.

JYJ decided on the album title as ‘Just Us’ and said, “We wanted to put our natural selves instead of pressure or compulsion to produce a nice album from the fact that this is our album after a long time.” This album has diverse genres; from sentimental ballad to groovy rhythmical songs that JYJ wanted to put. It also includes a trendy title track, Back Seat and acapella-styled songs filled with JYJ’s own harmonies. Naver Music will reveal the album’s production note that has the present of JYJ.

END_OF_DOCUMENT_TOKEN_TO_BE_REPLACED

JYJ CONCERT IN TOKYO DOME 2013
The Return of The JYJ
The unforgettable concert is finally packaged! 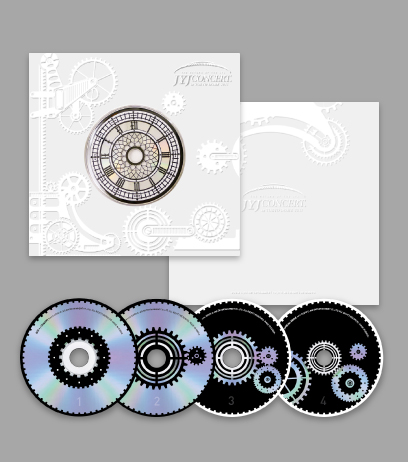 The return of the king.
April 2013, along with the dancing petals of Sakura, the long-awaited JYJ has returned to Tokyo Dome.
For a period of 3 days, from 23rd April 2013, JYJ held a glamorous Tokyo Dome concert ‘THE RETURN OF THE JYJ’.

The approximate 3 hours stage, packed with 26 songs, began with an impressive opening reflecting the image of a spring clock. The strong bond between the artists and fans could be felt, and it was a performance that one wouldn’t be able to take their eyes off, with the members’ individual charm and JYJ’s charm as a whole.

JYJ greeted excited audience with the grand scale stage opening of Mission with 16 main dancers and 40 additional dancers, and two other songs Ayyy Girl and Be The One from the worldwide album The Beginning. Further, after a refined solo stage of each individual member, JYJ showcased their great coordinated performance through IN HEAVEN.

END_OF_DOCUMENT_TOKEN_TO_BE_REPLACED

Kim Jaejoong, who exhibited images of various types through his first solo rock album in October last year, came out again with emotional ballad. Kim shows his versatility as an artiste through writing 10 out of 13 songs in the album. 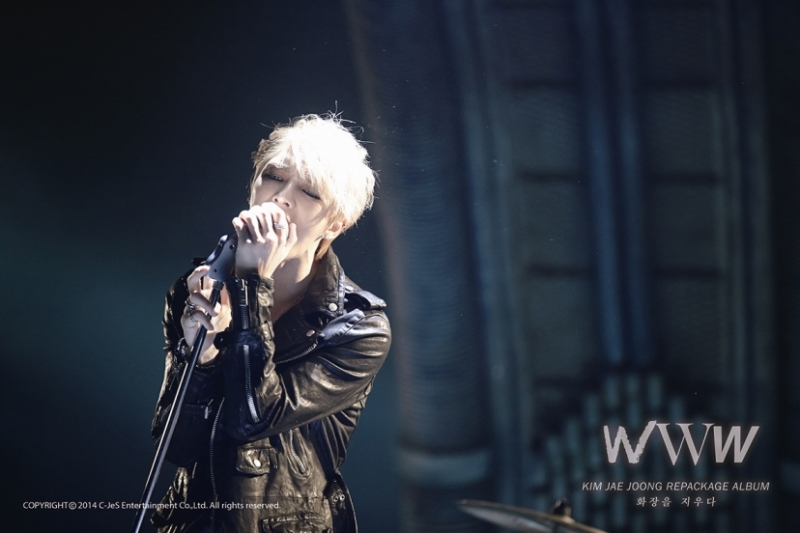 In this repackage album, 2 more new songs will be added and more love stories will be shared.

END_OF_DOCUMENT_TOKEN_TO_BE_REPLACED

TVXQ! Staff Diary – “She Got That Something”

In celebration of TVXQ!’s 10th debut anniversary, TVXQ! ‘Time Slip’ concert that was held at Ilsan Korea International Exhibition Center (KINTEX) from December 26 to 27 in 2013 was successful and ended nicely with your support. 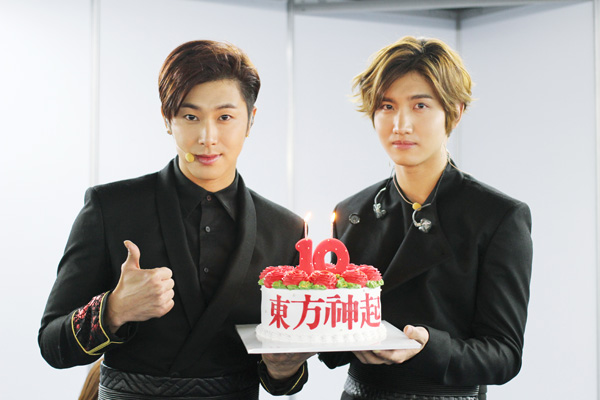 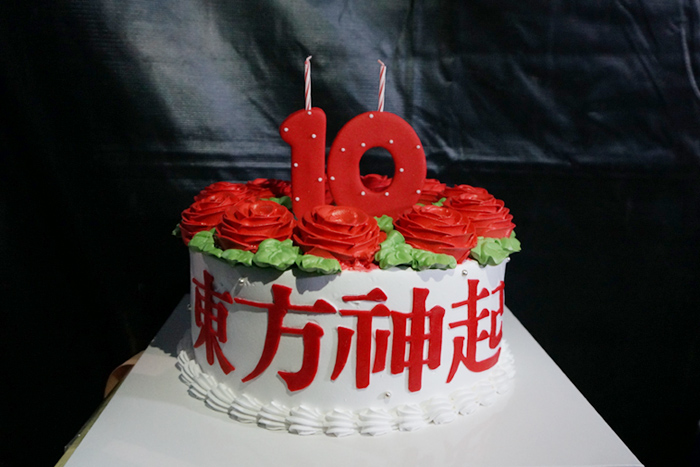 END_OF_DOCUMENT_TOKEN_TO_BE_REPLACED

2013 JYJ CONCERT in TOKYO DOME: The Return of The JYJ Ticketing Details 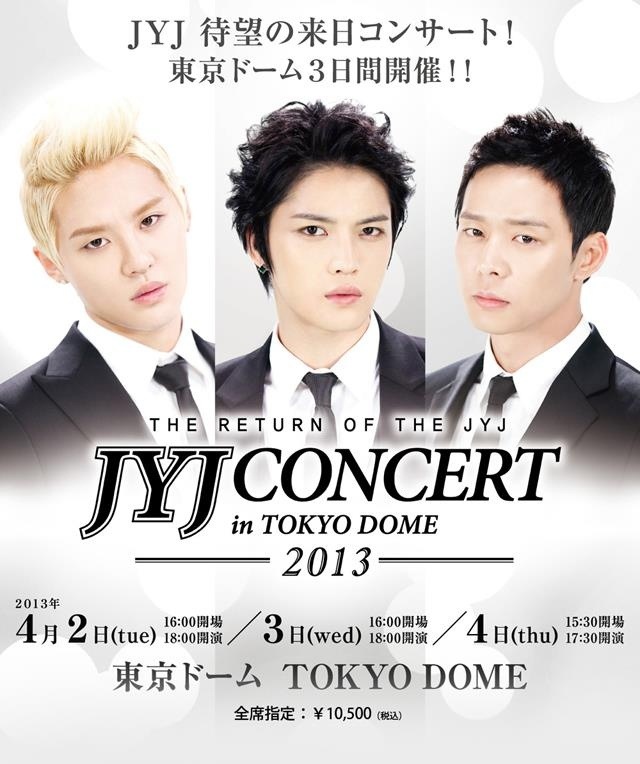 The ticketing details for the upcoming 2013 JYJ CONCERT in TOKYO DOME: The Return of The JYJ are as follows:

END_OF_DOCUMENT_TOKEN_TO_BE_REPLACED

Korea’s most notable fun place run by S.M. Entertainment, everysing, opens a gallery room specially for TVXQ! in conjunction with the release of their “Catch Me” album, for a month.

Check out the details after the photo below!

END_OF_DOCUMENT_TOKEN_TO_BE_REPLACED 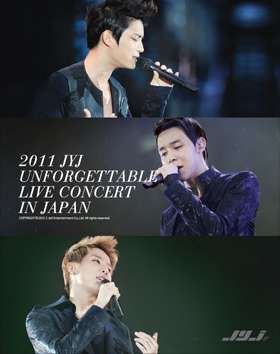 The live DVD records the full process of the concert which mobilized 80,000 people, that was held near the affected area of Japan’s earthquake at Ibaraki Prefecture.

END_OF_DOCUMENT_TOKEN_TO_BE_REPLACED

JYJ has been chosen to be the ambassador for “2012 Korea Brand & Entertainment Expo (KBEE)”. 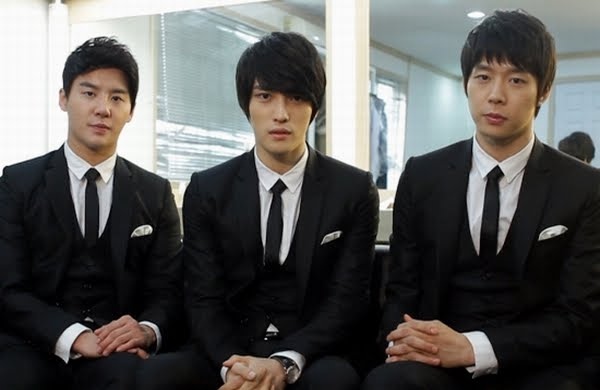 This is the 3rd event of the large-scale Hallyu (Korean Wave) expo “Korea Brand & Entertainment Expo (KBEE)” held overseas, hosted by the Ministry of Knowledge Economy and the Ministry of Culture, Sports and Tourism, and supervised by the Korea Trade-Investment Promotion Agency (KOTRA) and the Korea Creative Content Agency (KOCCA).

As the ambassador of this event and as the most loved “Hallyu-Star” in both Korea and Japan, JYJ is anticipated to be the icon of both harmony and exchange between the two nations.

[Article is translated by Siah from All About Cassiopeia. Any copying, republication or redistribution content other than for personal uses is expressly prohibited.]