Kim led a 3-month Asian tour for the first time after his military discharge. His agency, C-JeS Entertainment, said on March 3, “Kim Jae Joong finished his big project of the 2017 KIM JAE JOONG ASIA TOUR ‘The REBIRTH of J’ after his discharge. Starting from Seoul in last January to Yokohama, Osaka, Nagoya and Saitama in Japan, to Hong Kong, Thailand, Macao and Taiwan, over 130,000 fans were gathered in nine cities and proved the global popularity of Kim.”

Kim said in an interview last December, “The first thing I would like to do [after the discharge] would be meeting the fans face to face who had been waiting long for me,” as he shared his first greeting with the Korean fans in Korea University Tiger Dome less than a month after his military discharge. Even after two years of hiatus, he looked nicer and performed various genres of 20 songs live. It was a gift set for his fans.

The tour in Japan progressed afterwards. The hearts of Kim’s fans remained unchanged for his powerful popularity in Japan. The Japanese tour visited four cities for nine shows and gathered more than 100,000 people. Kim communicated in his fluent Japanese with trendy slangs and shared different stories on stage. The latter half of the tour took place in Thailand, Macao, Hong Kong and Taiwan. Despite the anti-Hallyu wave circulating, global fans filled all concert halls every week to see their idol and proved Kim’s power. In Thailand, 5,000 seats were completely sold out under three minutes and local media had attempted to report every bit of Kim’s whereabouts, showcasing his popularity as a Hallyu king. 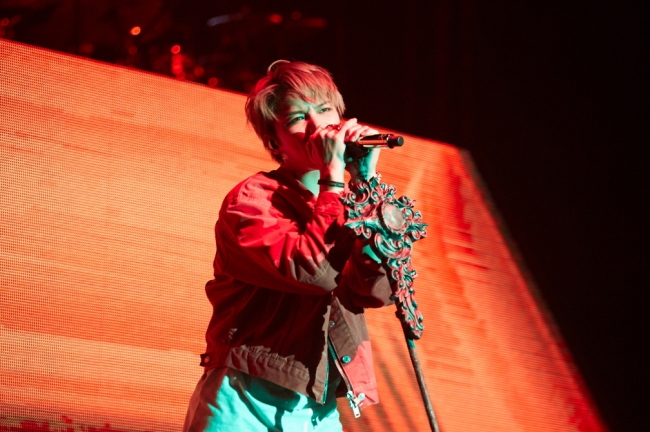 Kim prepared his second album NO.X and a hologram concert for the fans before his enlistment. After his discharge, he progressed his Asian tour with those songs. With his unsparing fan service to repay the love of his fans and through his legendary live performances, he colored Asia with ‘J-Holic’ and granted them with the perfect ‘Return of the King.’

SEE ALSO: The Stage Of Kim Jae Joong ‘The Rebirth of J’ Concert in Seoul [REPORT]

An official in one of the stops expressed, “The fans reacted more enthusiastically to our quality of directing, sound, lighting, special effects and the band. We also made unforgettable memories with the fans through a special segment of ‘Dress Code’ to communicate with fans in every corner of Asia. It was the best gift to fans of many Asian countries who waited for Kim from two to three years. I felt Kim’s true global popularity by seeing the people not only from Asia but also from Europe, United States, Russia, Middle East and South America.”

Kim revealed his feelings after finishing the successful Asian tour, “If there are other good projects abroad, I want to meet up with them with various contents even other than a concert. Now I feel like the fans in Asia are not necessary foreign fans but as one family. I was worried as the tour started right after my discharge, but I was so moved and felt grateful that many of you sang along in Korean. I want to continue many activities to gratify the anticipation and wishes towards me.” He continued, “I want to make my fans happy and treat them with a sincere heart in good music and good acting.”