2017 KIM JAE JOONG ASIA TOUR in SEOUL ‘The REBIRTH of J’ took place on January 21 and 22, 2017 in Korea University Tiger Dome. JYJ’s Kim Jaejoong decided to hold an Asian tour as the first step after his South Korean military discharge and confirmed 13 concerts in 8 cities from February to early April this year, starting from Seoul to Tokyo, Osaka, Nagoya in Japan and Hong Kong, Thailand, Macau and Taiwan.

This time around, Kim’s solo concert assured his undiminished popularity and shared a high-quality world of art in stage performance through his singing, stage, video, sound and lighting with his fans.

◇ T-shaped stage and direction which provoke the image of a party instead of a concert
When the lights went off in Korea University Tiger Dome and the music started to play, the audience yelled and cheered. The concert kicked off with an opening video sequence and it showed how much the fans missed their idol when Kim Jaejoong was in the military. As soon as Kim opened his eyes in the opening video, the hall was filled with a reborn exclamation similar to the titular name of the concert, “Rebirth”.

It was surprising that Tiger Dome has great acoustics despite it isn’t a musical hall. Most of Kim’s songs are in high-pitched notes that even surpass those of female artists. Being a rock concert, the show was mainly composed of high-pitched songs and performances. The music and lyrics’ articulation was clear and was communicated, excellently. The effort of the concert staff to adjust the sound details was shown from the beginning of the show. 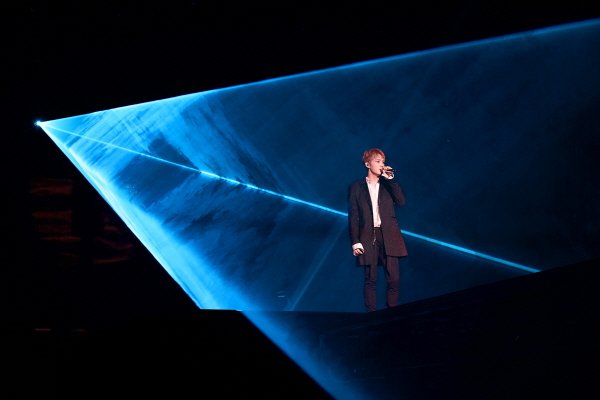 The first track was “One Kiss” from Kim’s first mini-album I and he appeared to be hanging mid-air with a splendid laser show on the second floor of the main stage. It was impressive as he was using all of his energy starting from his first performance.

Kim walked out on an extending stage while singing. The fans were enthusiastic but kept the order. He created a party-like atmosphere and the fans cheered ferociously as Kim got closer to them on the extending stage. 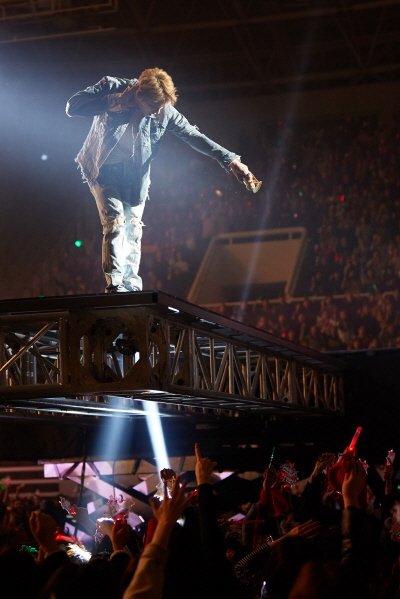 The entire thrust stage was transparent except a square stage in its middle to allow Kim to appear as if he was floating in the air when the whole stretch of stage was raised. The appearance of him ‘floating’ mid-air created a mysterious feeling as seen on the stage screens. The thrust stage can be elevated and rotated 90 degrees so Kim was able to walk to either left or right sides of the audience seating areas on the second floor. 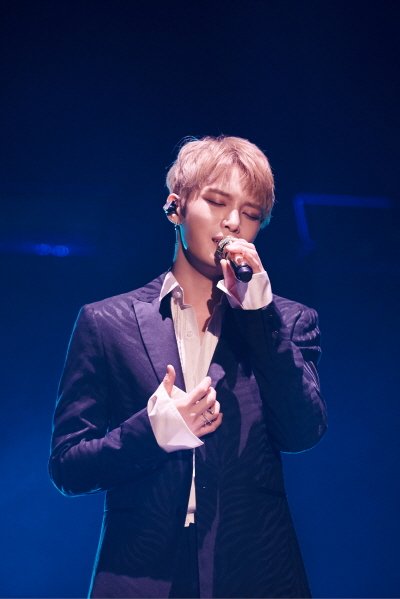 Kim later changed his top in backstage and returned on stage with a red towel in his hand. He sang “Luvholic” from his first album WWW, passionately. It was a perfect choice to have the audience to jump together and they responded with enthusiasm.

Following the songs, Kim sang as if he was kneeling. His gesture to make an eye contact with the audience in the rock zone projected his humility and charming performance at the same time.

Kim then showed off his excellent yet friendly eloquence which he could succeed in a talk concert even without any songs. The words that describe his speakings are “mature, consideration and thoughtfulness” rather than “extravagance.” An interview clip which was played during the concert showed his pure charm to keep his original intention while he went through an inner transformation.

Kim knows how to interact with his fans. He brought a swirl to the concert hall by shooting a confetti gun blaster to one of the audience who was on a wheelchair and said, “Don’t be sick.” He has the sense to diverge his attention to all the audience and has great communication skills.

Even though he was in the military, he was still sensitive and his sensitivity shone this concert. It was interesting that Kim knows how to use his body on stage to control strong and weak points in his speech.

◇ Singing sincerely to create a tightly-packed stage
Kim performed “Let the Rhythm Flow” in the middle of the stage with a standing microphone and created a moody atmosphere. The main stage screen captured his veins around his neck as he sang his very best.

When he sang “서랍(Drawer)” from his second album NO.X, the screen displayed the lyrics in the video background. Kim walked around the stage like a musical actor and sang tenderly. It was a kind and clever choice to show the lyrics visually to allow the audience to understand the lyrics better. He sang that song like a musical number. It was his intention to share the lyrics with the audience who may not know them well. The lyrics of his last encore song “지켜줄게(I’ll Protect You)” was also projected on screen.

◇ A dress code to look back to 10 years ago
The REBIRTH of J concert had a segment where the audience can participate in the show by wearing costumes from 10 years ago. For this event, Kim had a talk segment as he walked from the stage to the waiting room and to the backstage. It was like filming a reality TV show.

When the cameras shot close-ups on the audience, it was more meaningful than the other times and it encouraged the fans to participate. It was time for Kim to recognize how well they had prepared for this event and expressed the gratitude. 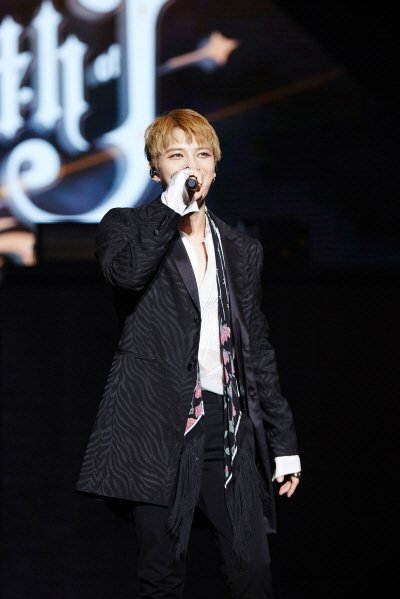 The event could continue with Kim on stage, but he moved to his waiting room to allow the audience to appear on the big screen as the center of attention. He created a different performance with consideration to appear and disappear from stage to seem as if he was filming a reality TV show.

In front of his fans, Kim Jaejoong respected the press attending the concert and mentioned them several times throughout the show. It was a jealous and envious moment for fans who were grateful only if Kim could turned his head to their directions.

Kim is particular about details. He made those moments intentionally to show his will and gesture towards the press. He was hinting that he will interact with his fans and other people more through his music in this Asian tour. 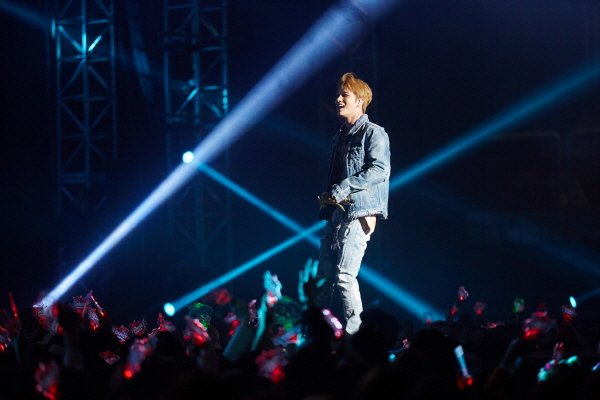 2017 KIM JAE JOONG ASIA TOUR in SEOUL ‘The REBIRTH of J’ has various aspects to be amazed about even solely as stage performance. The stage details worked well in such scale and concept.

◇ Background video of The REBIRTH of J that we wanted to watch on its own
The square stage in the middle of the hall in The REBIRTH of J concert displayed the same or similar video to that of the big screen on the main stage. This duplication gave an impression as if Kim was still on the main stage when he was already walking onto the thrust stage.

On the other hand, the same middle stage continued to display similar video tones and changed colors according to the onstage screen. The projections in The REBIRTH of J concert were clear and of high-quality. They did not have a single concept to follow, but each song had different moods in the background video. Kim sang “All That Glitters” on the second floor of the stage and the scene in the video portrayed a cyber space.

Since it was Kim’s solo concert, the fans’ views had to be focused onto him. The videos displayed on screen were artistic till they captured the attention of the audience instead.

As Kim was the main performer on stage, a lot of effort in concept and details of lighting and video design was put into consideration to meet the standards of a global artist.

◇ Live concert video resembled the quality of a music video or an advertisement
In the concert, they prepared several videos which were displayed on the onstage screen while high-quality live scenes were projected on two large screens on both sides of the stage to show close-ups of Kim onstage. These clips on the large screens were so much like a music video or a TV advertisement. This proved how the artist and the concert staff had prepared the show with repeated rehearsals.

The REBIRTH of J concert didn’t rely only on one global artist but also his staff as primary roles. Of course, the fans who bring the show together were important asset, too. The detailed and broad stage direction which stood out made the fans to focus onto the stage and empathize with it.

The clips shown on the mid-stage screen during “Love You More” and during the end of the concert allowed the back rows of the second floor audience to see their idol closer even when he was standing on the main stage.

◇ Splendid laser show and lighting to divide the areas
The lighting and laser played important roles to create grandeur and to part the sections. In “Rotten Love”, the blue lights gave an effect that the secondary stage was not visible and expressed the power of Kim who was standing still and singing.

During “원망해요(All I Desire)”, as he walked out to sing on the middle stage, his black outfit matched the black lighting. The lighting made him to feel like he was in a pyramid making a confession to the audience, whispering into their ears. The stage was raised and leveled with the front row of the second floor audience.

◇ 7 live concert band members and birthday celebration event
The seven band members were seated on the left and right sides of both first and second floors on stage. The concert jam among the band itself and between them and Jaejoong was outstanding. Following the band introduction, they played “Welcome To My Wild World” with a shocking video which matched the rhythm of percussions.

During the second night concert, the fans prepared an event to celebrate Kim’s birthday. From the first encore song to the birthday event, the audience held up hand banners written “Let’s walk together again” and sang along to the birthday song. It was a touching moment.

Kim, who was in tears, continued onto the last encore song “지켜줄게(I’ll Protect You)” with the fans for three times and eventually ended the concert. He bowed earnestly with gratitude instead wishing the audience a goodbye like a star.

The REBIRTH of J concert has showcased that Kim Jaejoong will now protect his fans who had been protecting him all along. I wish he will have happy challenges and achievements similar to the name of the concert and if he continues his effort, he will be the Kim Jaejoong who is loved by fans more than ever.