XIA’s New Album ‘Flower’: What We Know So Far

It has been a year and eight months since JYJ’s Kim Junsu (XIA)’s second album Incredible was released in 2013. In that 608 days of wait, the 29-year-old singer held his second and third installment of ballad and musical concerts with orchestra, took on his role as Ji Wook in the Musical December and Count Dracula in The Musical Dracula, released the second Korean studio album Just Us as JYJ, and performed in 15 shows in countries across Asia.

That being said, after the news broke regarding the idol’s comeback in January this year, fans across the globe have been showing ultimate enthusiasm for his grand comeback as a solo artist with his Flower album. Let’s take a look at what his new album has to offer that we’ve got so far.

XIA’s third solo album Flower will be released on March 3, 2015.

Back in January, his agency, C-JeS Entertainment announced that XIA will be making a comeback with a brand new album and will showcase a shocking transformation. Four new teaser photos were revealed in February and to fans’ surprise, the album has, indeed, raised the bar. XIA revealed that he wanted to present a different approach in terms of appearance to that of his Tarantallegra and Incredible albums. He said, “I wanted to approach the audience with a music different from what I can show as JYJ, and show off something that only I can do.”

XIA Involved In Mostly Everything

As a singer-songwriter, XIA prepared diligently for this new album even while he was working in group activities as JYJ last year. XIA did most of the work in making a more perfect album including producing, writing and composing most of songs, and the album jacket styling. An official participated in the album photo shoot said, “XIA’s idea was reflected in his jacket photo-shooting concept since his interpretation of the album was excellent.”

Possible Album Of The Year

C-JeS Entertainment said that this new album will probably be the best album in the music industry for the first half of the year giving that XIA’s vocal skills are beyond matchless, his capacity as a singer-songwriter, and his power of dance performances are acknowledged by many choreography artists from North America, South America and Europe.

With Tarantallegra released in 2012, XIA has been recognized as the the best vocal-skilled idol by Korean vocal trainers, music experts and the number one most suitable idol for the ‘I Am Singer’ singing competition program. The people in the music industry and public is said to have been highly expecting XIA’s new album as he often tries something new.

Collaboration Of Many Great Artists

Flower album will contain an amazing line-up of songs featuring many great artists. Popular rapper, Dok2, was among the many announced to have collaborated with XIA for a dance track. Previously, these two talented individuals worked together on “Turn It Up” from XIA’s second studio album Incredible. The title track “Flower” will feature Epik High’s Tablo and Jung Sun Ah for a rap and an aria, respectively.

Besides, Brown Eyed Soul’s Naul personally wrote and composed a sentimental ballad track for XIA as a gift. Yang Dong Geun was the last featuring artist announced to have written the rap lyrics and will be singing his rap portion in another track in the Flower album. This 13-track Flower album will be the best gift set for this spring.

World-renowned choreographer Jeri Slaughter and his team from the States will participate in a music video that will be released at midnight of March 3, 2015. Slaughter and his crew have been with XIA and JYJ for some time now since JYJ debuted with its first English album The Beginning in 2010. They travelled and performed amidst the ‘JYJ World Tour Concert’ in 2011 and 2012, and during XIA’s Tarantallegra tour in 2012.

Slaughter also choreographed the music video “Incredible” in 2013 and has worked with Whitney Houston, Mariah Carey and Christina Aguilera. He was also the choreographer of Jennifer Lopez, Ricky Martin and the Spice Girls. 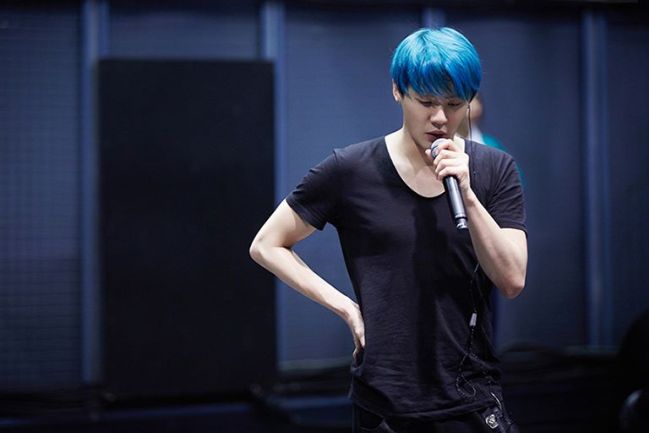 XIA rehearsing for the Osaka show

XIA will embark on an Asian tour on the same day as the album release with Osaka as the start of the tour before continuing onto cities in Korea, China, Thailand and Japan. An official also previously revealed that they will not be putting a limit in costume and concept designs for the concert tour, and XIA will showcase a stage with high-quality music and intensified live performances.

As tickets for the two-night Seoul concert were sold out, C-JeS Entertainment has been receiving many calls from foreign presses and the expectation for the Asian tour has already reached its peak.