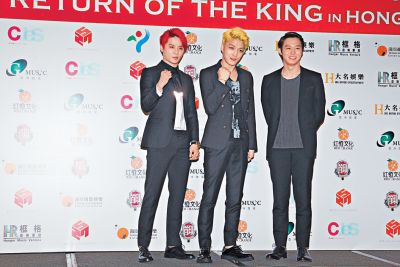 The last time they held a concert in Hong Kong was 4 years ago, which is why about 200 fans came to pick them up at the airport to their press conference yesterday. There were also fans who were crazy enough to trespass into the airport’s restricted areas just to see their idols. At the press conference, the three emphasized the enthusiasm of Hong Kong fans, and also mentioned that the stage in Hong Kong will allow less distance for fans to come in contact with them than the stage in Seoul.

The three JYJ members landed in Hong Kong yesterday. For the sake of ‘The Return Of The King’ stop media tonight, lots of fans prepared the “three treasures”, folding chairs, banners, and cameras to pick up their idols outside the secret passage at the airport. The number of fans, who filled up the whole airport arrival hall, was about 200 people. There were pictures of fans on Weibo that trespassed into restricted areas to take pictures of JYJ. The fans were believed to have followed JYJ from Korea to Hong Kong. JYJ mentioned these fans and their curiosity as to why they were in the restricted areas during the press conference.

At 1:00PM in the afternoon, red-hair Kim Junsu was the first to come out. Many fans who saw him screamed at first sight, and Junsu, seeing this, waved his hand continuously, and also stopped kindly to allow reporters to take pictures of him. Park Yoochun, who always “follows his own way”, wore sandals and as soon as he came out, he immediately went inside the car. Kim Jaejoong, who was wearing a hygiene mask to cover his face, waved to fans goodbye before getting in the car. The three members went in their own ways separately in two cars. 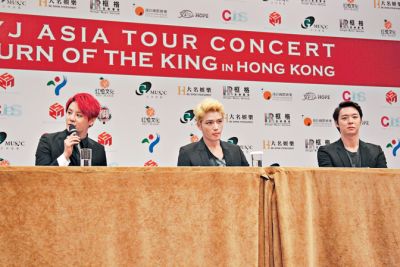 At 5:00PM yesterday, JYJ, after resting for a while, attended the press conference in black suits. They mentioned the enthusiasm of the fans. Yoochun thanked the fans, but also expressed his shock as to how fans got into the restricted areas, and that seeing them full of hope, he thinks they probably waited a long time for them. Coming back to Hong Kong after 4 years, Yoochun mentioned that Hong Kong’s sky color is beautiful, while Junsu mentioned that Hong Kong’s scenery cannot be put into words.

Junsu said, “I came here many times, but each time it was cloudy or raining. I like boats and the sea, and this time when I came to Hong Kong, it seems like Busan or Hawaii as I feel very relaxed.” The three also said that their hotel was somewhere near their concert venue. While it’s not near the city and they need to rehearse for the concert, they expressed their desire to go sight-seeing.

JYJ finished the Seoul stop of the concert last week. Junsu picked Hong Kong as their second stop because of the fans’ enthusiasm. Jaejoong has already seen the Hong Kong concert stage, and thinks that it will allow fans to have more contact with them. Having debuted for 10 years, Jaejoong says that the members’ chemistry have surpassed those of family members or friends, as they know each other’s every move and gaze. Jaejoong says that they known each other for more than 10 years. “The members rely on each other. If a member gets hurt, we will try to comfort him; if a member’s happy we will be even happier,” he said.

Their newest album Just Us contains 5 songs picked from 100. The members coincidentally picked 3 similar songs. In the album, each member has their own style of music. Yoochun’s Thirty describes the feeling about becoming 30 years old, while Junsu’s 7 Years describes the memories about first love, and Jaejoong’s BaBoBoy has a rocker edge to it.

Photos / Sing Tao Daily
Translation by / Melody (All About Cassiopeia)