TVXQ!’s Changmin On Leaked Set List From SMTOWN Concert: “I Was Not Pleased”

TVXQ!’s Changmin expressed his displeasure on the leaked cue sheet for the recent Seoul concert of SMTOWN. 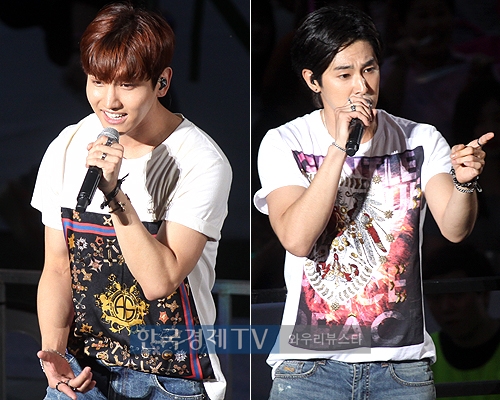 After the performance, leader U-Know Yunho expressed his gratitude to the fans who attended the show and said, “I feel shy. Many fans from over 22 countries came and I’m thankful that we united with SMTOWN. Please anticipate for more.”

Before the concert began, the cue sheet for the show was leaked online. It became known that Changmin will cross-dress with his fellow labelmates Minho, Suho, and Kyuhyun to portray popular girl group, Girl’s Day. Changmin showed his displeasure, “Someone leaked the cue sheet. It’s a ridiculous thing that happened, and if that person gets caught, I won’t stay silent. I was really displeased.”

On the other hand, the SMTOWN tour had held successful concerts in Seoul, Los Angeles, Paris, Tokyo, Beijing, and many more since its first tour back in 2008, and they held the first Korean brand concert in Paris, France in June 2011. On October 4 and 5, the tour will be held in Japan’s Tokyo Ajinomoto Stadium as a follow-up of the Seoul concert.

Photo / 한국경제 TV
Translation by / Judith (All About Cassiopeia)