JYJ’s Yoochun spent a special time with fans and welcomed his 29th birthday. 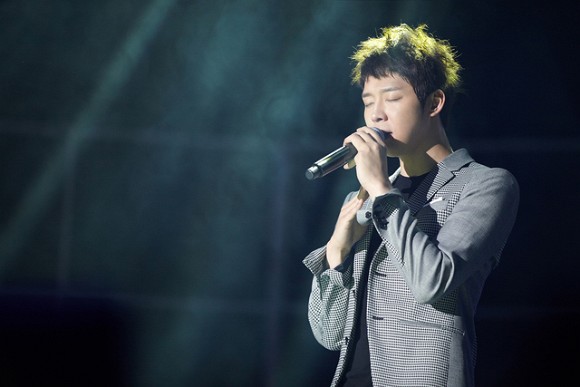 The fan meeting this time around, which was held at Ilsan’s KINTEX, wasn’t designed in a way to meet the locals fans, but instead, it was for the purpose of spending meaningful time with fans on his birthday. The event, which had tickets completely sold out within 15 minutes from the start of sales, was progressed with a birthday party for approximately 3 hours, in the hot response from fans.

The birthday party and fan meeting which was “Yoochun’s house”-themed, started off with the star appearing on stage (which was decorated like his own room) along with the sound of chime. On the appearance of the specially designed cake, fans sang a birthday song along with the use of penlights. Yoochun expressed feelings of gratitude after blowing out the candles, “So many of you (fans) have gathered. Thank you everyone.”

Close friendship can be seen between fellow artists from the messages. Fellow JYJ members Jaejoong and Junsu said, “It’s a pity we couldn’t join in the celebration. It’s a short message but we think you’ll be happy receiving it. Hope you have an enjoyable time.” The casts from recently ended Three Days Jang Hyun Sung, Park Ha Sun, So Yi Hyun and Choi Won Young also conveyed, “Happy birthday elite agent Han Tae Kyung. It was an honour working with you and we enjoyed it. Let’s meet in the production again.”

Following was a surprise video message from Yoochun’s mum. Yoochun, who couldn’t hide his emotions and was filled with tears, was wrapped in a heart-warming atmosphere.

Yoochun prepared a special corner that can be enjoyed with ‘6002′ (Yoochun’s name expressed in numbers) fans. Selecting fans’ wishes, Yoochun did things like ‘3 steps wink’, sang nursery rhyme 3 little bears, and gave character bento (made on the stage) to fan as a present. Following on, in the ‘Yoochun, please give the green light!’ corner, Yoochun gave out advice from the standpoint of a guy after hearing love consultations from fans.

In the birthday party and fan meeting which was held in Korea, excitement from overseas fans could not be missed. Prior to this, China fans posted screen advertisement at Myeongdong Station to wish their idol on his birthday. Fans from Japan, Hong Kong, Russia, Turkey, London, Azerbaijan also attended the fan meeting event, proving Yoochun’s global popularity.

Lastly, Yoochun expressed his thoughts by saying, “I thank all of you sincerely from the bottom of my heart for today. I can put all my heart in working hard on what I’m doing because you have been taking care of me and loving me behind the scenes. I’m having fun in the production of JYJ’s album, so I hope I’ll be able to show you good activities from us.” He also conveyed plans for the future. In addition, Yoochun sang The Empty Space For You from Miss Ripley OST, and self-composed song Walking With Her In The Spring. The curtain closed off with fans throwing back paper planes to Yoochun, as if to reward him for the brilliant performance in ‘2014 PARK YUCHUN Fan Meeting “Housewarming Party”’.

After a successful fan meeting in Korea, the next confirmed solo fan meeting as an actor will be on the 14th in China, Guangzhou, and 29th in Shanghai. It’s scheduled to create another special memories with China fans.

[Article is translated by Lin from All About Cassiopeia. Any copying, republication or redistribution content other than for personal uses is expressly prohibited.]