TVXQ! tops the weekly music chart of Korea and Taiwan as 1st place with their 7th album ‘TENSE’.

‘TENSE’ which was released on January 6 gained 1st place in the weekly charts from January 6 till January 12 of various sites that record the number of albums sold including Hanteo Charts, HOTTRACKS, Synnara Records and many more. This achievement proved the power of TVXQ! once more.

Five Music, a site which also gathers the number of albums sold in Taiwan, proves TVXQ!’s high popularity in the overseas by placing the band as 1st place in Korea-Japan’s weekly chart.

In addition, ‘TENSE’ not only received positive comments domestically in Korea but also from a famous American press, Billboard, saying, “It’s an album that is good enough to satisfy the fans of Michael Jackson, Bruno Mars and other R&B fans”. Billboard also introduced the album’s title song, Something, as “A song that successfully combined the sounds of the past and the sounds of the present”. Something is truly getting high amount of interests from music fans globally. 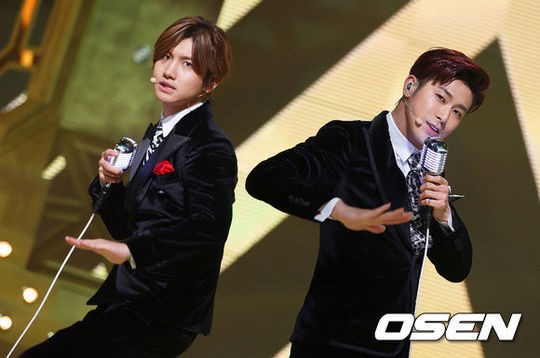 Through Something, TVXQ! showed a high level line performance by showing off various choreographies through connecting the line with a microphone. The duo also showed a rhythmical quiet dance and an ensemble with their dancers to give a feeling as if a person is watching a musical and that person’s attention is caught by a differentiated performance.

In related news, TVXQ! is currently promoting Something actively by showing up in different Korean music programs.