‘Jackal is Coming‘ where JYJ Jaejoong played the main role for the first time will be released in Japan in May. 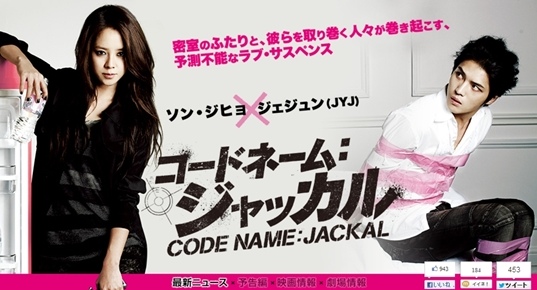 ‘Jackal is Coming’ opened a Japan Official Homepage and started a fundamental preparation for its release. Along with that, they made a Twitter and a Facebook account for Japanese viewers. It will be released under the name of ‘Code Name : Jackal (コードネーム：ジャッカル)‘.

On the 14th, a Japanese movie-related media broadcasted the release of ‘Jackal is Coming’ in Japan and said, “This masterpiece gets worldwide attention from Asia just after its release.”

For Jaejoong, who played main character, they said, “Through the movie ‘Postman of Heaven’, dramas such as ‘Protect the Boss’ and ‘Dr. Jin’ and etc, he is showing definite growth in acting and we highly value him. Also, he will show us a ‘derp image’ which will flip his established sexy image and give us entertainment.” They also mentioned the news about the OST that Jaejoong wrote and composed himself, which that raises fans’ anticipation.

As JYJ has been popular in real local field in Japan, the reaction of local press are heated as well. On the 14th, when the news of releasing ‘Jackal is Coming’ was notified, ‘Jackal’ was on Japan Twitter trending keyword, and Jaejoong’s name was the first on person real time searching keywords.

In addition to that, ‘Jackal is Coming’ depicted Choi Hyun (Kim Jae Joong) who is the best Hallyu star and Bong Minjung (Song Ji Hyo) who is a clumsy killer and tries to kidnap Choi Hyun, and other people who chase them, all together in a comic sense.