Star Column With TVXQ! Ep. 2 – “Story Behind the Concert” [EXCLUSIVE]

TVXQ who is reborn as the artist beyond the title of an idol. After 4 long years, they finally held their TVXQ! LIVE WORLD TOUR ‘Catch Me’ in SEOUL on last 17th and 18th of November in Seoul Olympic Park Gymnastics Stadium.

As it was their concert-going-out after a long time, they had complicated feeling about it. We are here trying to convey their tension, gladness and the heart to the fans vividly. Episode 2 wants to show the scene of the waiting room of U-Know Yunho and Max Changmin without adding or subtracting.

Hello. U-know Yunho from TVXQ!. I’m saying Hi in this way again. This is second star column already and the first picture that I will introduce to you is the one that captured the scene from the concert filming in recent time. There was a part of filming with children and I was so happy because I was with these adorable friends (T/N: He is referring to the children). It’s a commemorative shot! With a baby that I called him “my son” whom I especially cherish. Does he look like me? You should grow up to a cool man like this hyung. ^^ 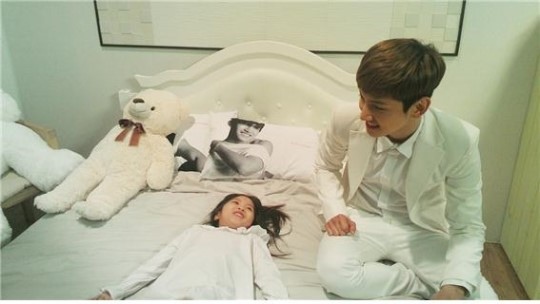 Who is this lady in this pure and cute white dress, waiting for her shot? You guys who came to the concert have seen her through the film in the actual spot, right? I was energized when I was with children. Unconsciously, I put on an Appa-smile while feeling satisfied. I guess this little friend of mine also enjoyed filming with me because she couldn’t stop smiling. 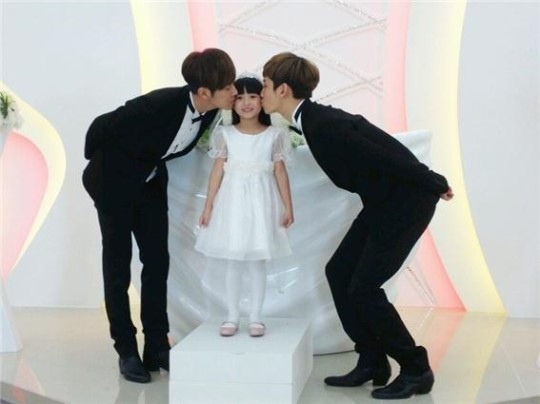 Ah~ This is the picture that we kissed her. You guys who came to the concert know which scene was it, right? ^^ Changmin kissed on her cheek naturally but I was kissing next to her eye. I tried to film it naturally but we got a NG! I couldn’t feel tired, even though I was, when I was filming with this cute and angel-like little lady. ^^ Grow up cheerfully and healthy! 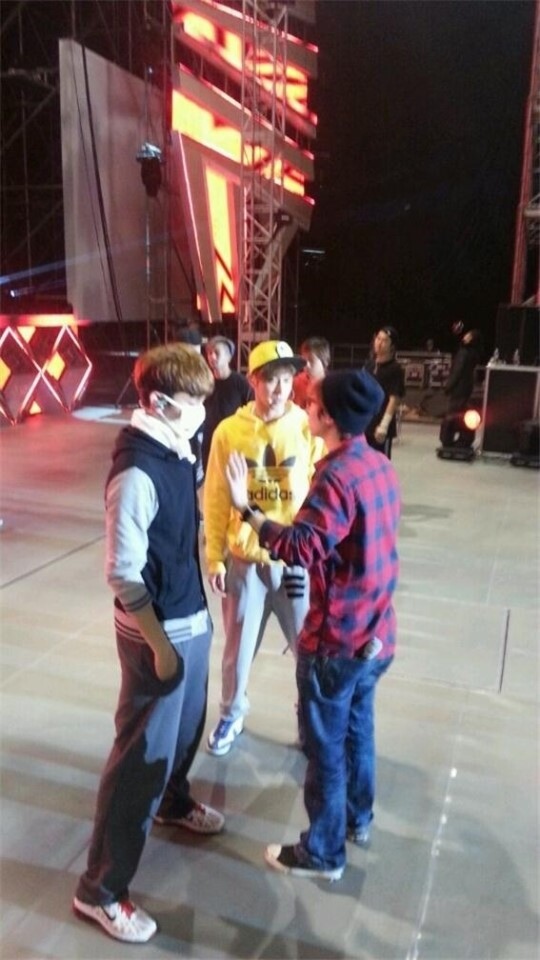 Finally, it was D-1! The concert rehearsal that continued from 16th lasted till dawn of 17th~ Max Changmin and I were checking the movement and choreography according to the directions of Beat Burger’s Shim Jaewon-hyung! Everyone was tired but we all were trying to concentrate. Our garments were too natural, right? ^^ But our mental attitudes were grimmer than any other moments like our faces expressed. Don’t be disappointed at the blurry picture. Manager-hyung took it in a most secretive way so that he wouldn’t interrupt our practice. ^^ 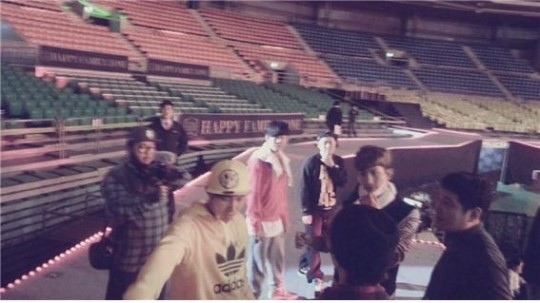 The real rehearsal scene on the peak of discussion about the stage movements. Everyone looked serious! Just like this, we discussed and negotiated endlessly while imagining your shouts that will fill up the seats. Although we practiced in an empty stage, a short while later this place will be filled with fans’ shouts? ^^ With our hearts fluttering and expecting, we practiced endlessly! 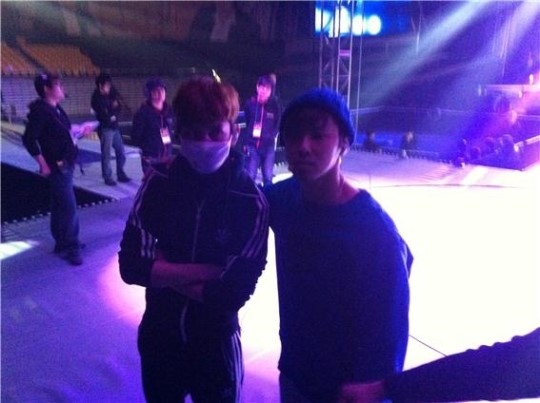 Finally, it was D-Day! This was on the spot of the rehearsal. Can you see our grim faces? Due to throat problems, Changmin practiced with his mask on. He was really exhausted that time. But the continuous practice and correcting the movements and much more for a better concert, there was no other way for us even the lack of sleep. ^^ Especially the staffs who worked harder than us in the back! So we didn’t show our tired expressions. To repay the people who did their best for us, we should succeed in this concert! 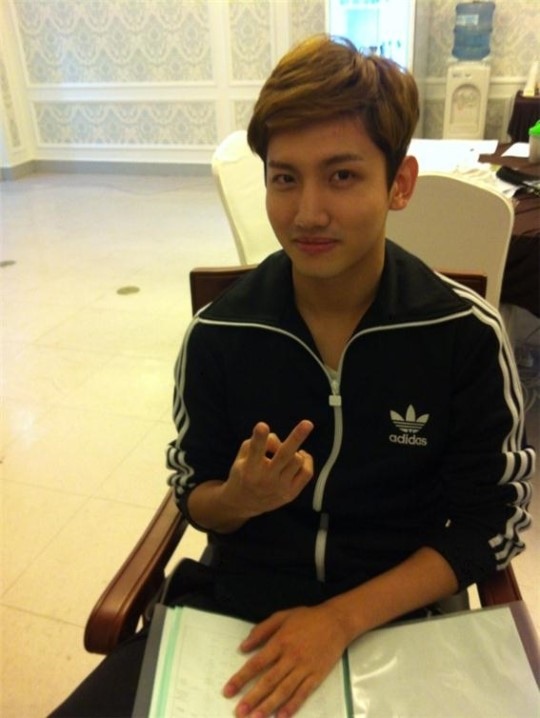 Do-doong~ This is my first bare face that I show off through Naver Star Column. Haha. I don’t reveal my bare face that often but for the Star Column readers, I boldly opened this to the public! On the 17th, which was the day of the concert, I can see that I looked worn out. ^^ Now I should make up slowly to meet you guys! My anxious heart that told me to show you a great concert, comes first now. Before any concerts, it is obvious to memorize the orders, right? Never! This was not planned. 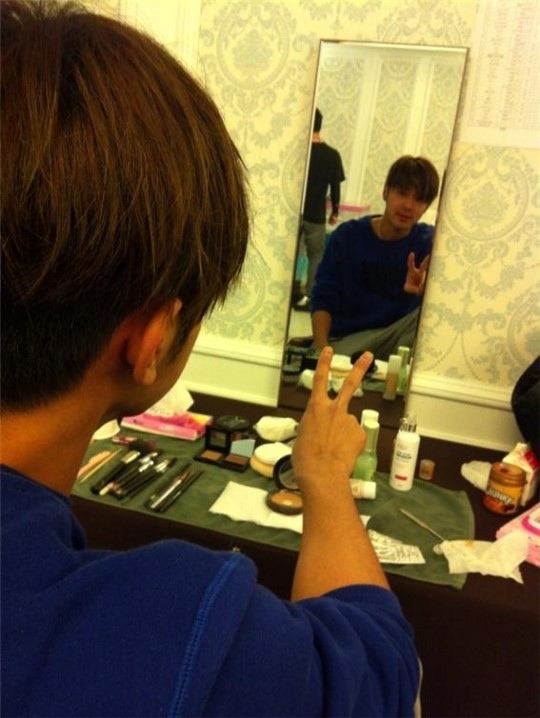 Before the preparation, here’s a shot of me too! Did I pour too much on the rehearsal? I looked tired a bit. But don’t worry since I’m that type of person who gains power on stage. Peace~ Ah! By the way, leftover strawberry milk and chocolate appeared for special act. To restrain fatigue, I ate sweet food. Then, as if I wasn’t tired, I burst into power~ Burst~! 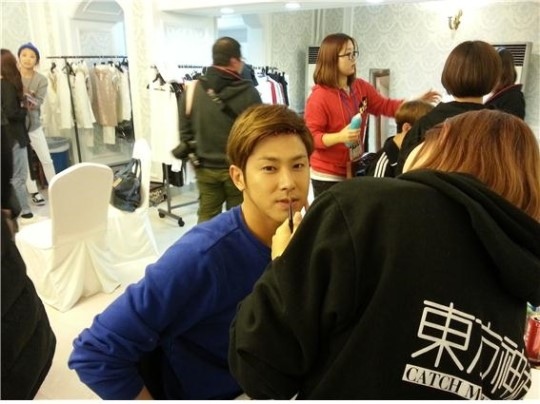 After rehearsal, the preparation began. We kept awake all night through so we were physically tired while palpitating for the first concert. Ah! I forgot to remove my hair pin. Is this a humiliating picture? Haha. But I know you guys will find it attractive here, let’s pass this over. ^^ Question! Find Changmin in this picture~ Audience, let’s meet in a moment. ^^ 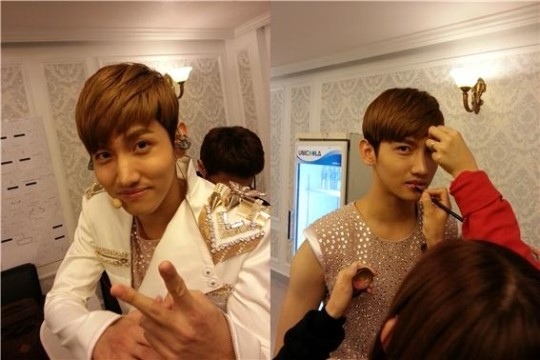 Following after Yunho-hyung, I put on my make-up as well. The left picture was right before I appear on the stage, wearing the microphone. I was posing the V sign but I can’t hide my nervous face. ^^; The right picture was taken when I wiped my sweat and fixed the make-up in between the concert film. To get on stage on time, keeping up with the time with the stuffs is important. The glitter of my eyes towards the camera, it’s alive~ 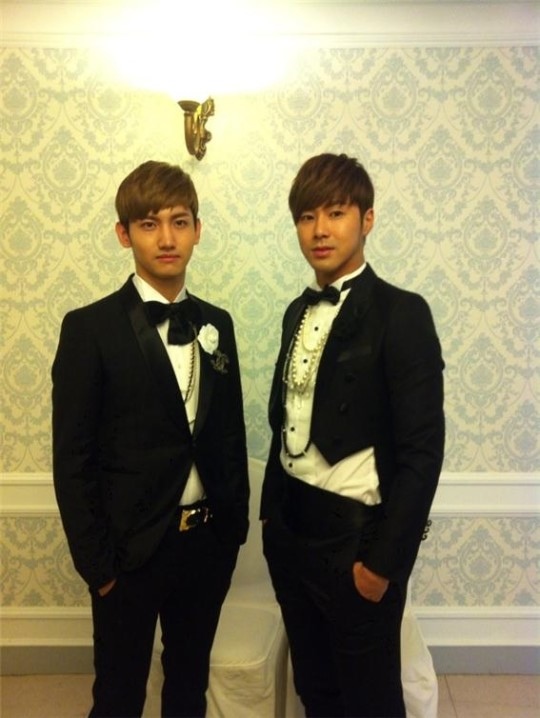 Before the second day of the concert, earlier than the press conference, I took a photo! Standing before the reporters makes me feel nervous and joyful at the same time. ^^ Truly, many news reporters came today. I am anticipating what kind of questions will be asked about the concert. Yunho-hyung and I smartened ourselves about how do we look. We look like English gentlemen, you said? Haha. It is embarrassing to say like this alone. ^^; In a while, we are going to meet the best fans. 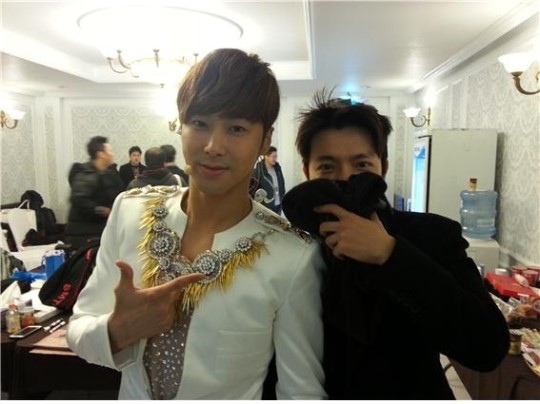 Is there someone who can recognize the person next to me? Who is he? Yes, he is Donghae from Super Junior. You guys who recognized him by just looking at his eyes are true ELFs! I was relieved by our surprise guest before the concert. Since he was familiar with me from trainee days, we are like brothers to each other, and he is thankful and secure presence for me. ^^ Thank you for coming even though you were busy, BROTHER. 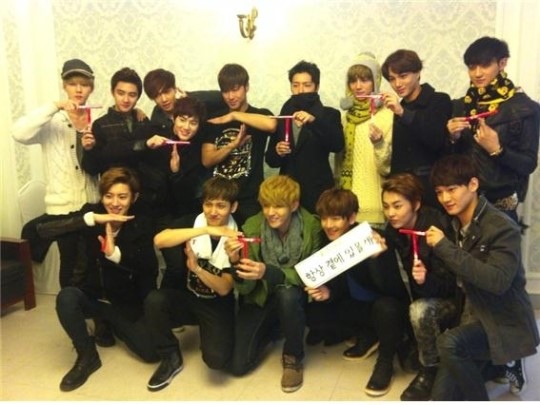 We took a commemorative shot with SMTOWN family! We did a ‘T’, which was the slogan that we were talking about with the audience. Now, we did it with the juniors. Thanks from our sincere hearts to Super Junior’s Donghae, EXO-K and EXO-M who visited our concert today! With their support, we could end the concert successfully. Ah! Of course, you all know that the cheers from the fans are the prime force that leads us, even though we don’t say it, right? ^^ Thanks and thanks again! 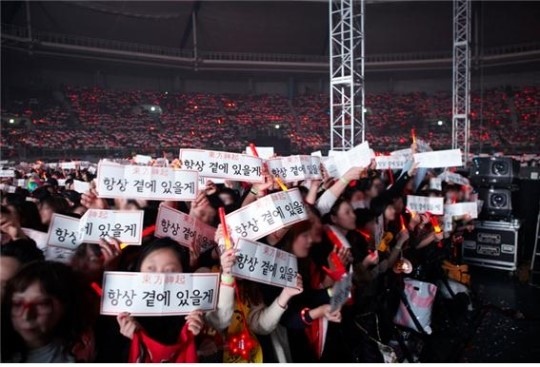 Ah~ It really moved me like a wave just by looking at it. We saw this picture after the concert. The fans directly organized the event. ‘Always Next To You’ – this slogan was too moving. We will always be next to you guys, too. For privacy, we blurred your faces a little but we will remember these people and the fans who visited the stadium. ^^ ALAVIEW (T/N: I love you) BABE~

2 thoughts on “Star Column With TVXQ! Ep. 2 – “Story Behind the Concert” [EXCLUSIVE]”