He was alone onstage but the stage was full of his presence. His eight years of experience shone brightly. Kim Junsu soared high not with TVXQ or JYJ, but alone in his first solo concert held from May 19-20.

He showed how much effort he had put into the concert in the performances for the songs from his first solo album. He started with Breath, and sang his way through No Gain, Even Though You Already Know and Around and Around.

Kim Junsu’s teamwork with the eight foreign dancers, four men and four women, was also a sight to see. Jeri Slaughter, Christina Aguilera’s choreographer, had picked out the members of the dance team through an audition held in America, and the team helped make Kim Junsu’s performance shine.

The performance of Kim Junsu’s first single cut Tarantallegra, the title of a ′magic spell′ , made the singer’s audience feel as if they had been pulled into a mystic world. The large LED screen, 7m high and 12m wide, and a 10m high pyramid lift, used for the first time ever in Korea, all added to the experience.

Kim Junsu then turned on the sexy with his performances of Lullaby and Fever. His use of mirrors in the performance for Lullaby was especially intriguing. Moreover, he showed his polished acting skills from his experience as a musical actor through Even Though You Already Know, I Don’t Like Love and You are so Beautiful. It was as if his audience was watching on as he performed in a full musical.

Of course, Kim Junsu was happy about his first solo concert, but he revealed that it hadn’t been easy to get there.

“I was hesitant on releasing a solo album because of the many limits I face, but I think it’s great that I did. It was more hard for me because, as you know, I’m limited in my appearances on televised broadcasts, and I started with the knowledge that I can’t promote my album openly even after I release it. It was harder to put together a 12 track album in the midst [of such difficulties],” he said.

As if to make up for the hard times, Kim Junsu seemed to be pouring all of his energy into every performance.

The concert only lasted two hours, but it was passionate enough to leave an impression on his fans who wouldn’t be able to see his performances on television again. Sometimes he bewitched and sometimes he soothed; Kim Junsu thus succeeded in casting his own brand of magic on his fans. 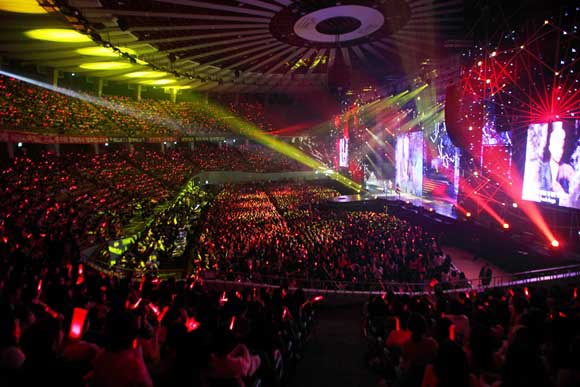