JYJ member Kim Junsu gave 8,000 of his fans a night to remember at his first solo concert. 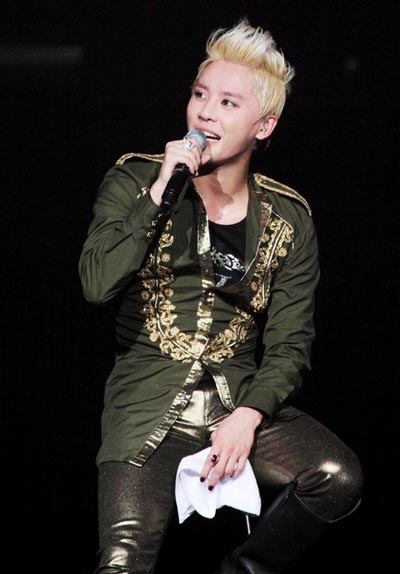 Kim Junsu held his exclusive concert, Xia 1st Asia Tour in Seoul, from May 19-20 in Seoul. 8,000 fans not only from Korea, but also from Japan, China, Malaysia, Canada, Chile and France crowded the venue to witness Kim Junsu’s solo debut.

A rep from Kim Junsu’s agency C-JeS Entertainment told enews on May 20, “The concert sold out all of its tickets as soon as they were opened for sale last month, and fans from all over the world came in to celebrate Xia’s (Kim Junsu) first solo concert. There were so many fans who passed out in the middle, we plan to prepare more ambulances for today’s performance. It was such a splendid concert that fans couldn’t seem to pull themselves away from the venue after the exciting two hours had gone by.”

Kim Junsu told a perfect 90 minute long story with 17 performances, which included 11 songs from his first studio album and a few musical numbers. Jeri Slaughter, the man best known for being Christina Aguilera’s choreographer, held auditions in America for Kim Junsu’s concert and managed to put together the best dance team.

He perfected the performances of the concert’s main attractions, including those for Tarantallegra, No Gain and Breath.

Kim Junsu matched Jeri Slaughter’s hard work with his own set of skills. The top-class idol’s moves synced perfectly with his dancers’, and he received cheers from his fans for his sexy performances of Lullaby and Intoxication. The musical numbers and Even Though You Already Know, I Don’t Like Love and You are so Beautiful emphasized his vocals and hearty emotions.

“I was hesitant on releasing a solo album because of the many limits I face, but I think it’s great that I did. I’m so happy and moved to be able to meet with my fans, have them listen to my music and stand on stage. I want to sincerely thank all of my fans.”

Kim Junsu soon plans to continue on an Asia tour through six more cities in Asia.

Check out our photos from the concert here!